Trying not to be in the same country as George Bush 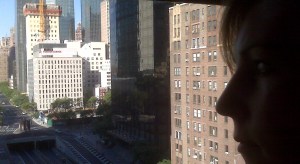 So I am now entrenched on floor 11 of Beekman Towers.  The longest day of my year is now fading into dusky quiet (all that stuff about New York never sleeping is crap).  I eventually got some food.  I asked for Asian Vegetarian, which normally guarantees a curry and dhal of decent temperature, but America airlines don’t dabble in such foreign muck, so I had to settle for a sort of slop that reminded me of Rohan Candappa’s  description of school dinners in Pickle Head (“raisins really have NO PLACE in a main course” – I recommend the book, it is a VERY funny read).  This was followed later by pizza (c’mon, you kidin’ me right?).

The chap sitting next to me was perhaps the least friendly New Yorker I have come across.  He really didn’t want to talk to me at all, so I invented a nasty story about his week long visit to see a “friend” in London, which included rent boys visiting his B&B in Victoria.  The only gem he offered was a grandiose slating of his President (who has just been less than well received in Europe this week)   At one stage he asked whether I was trying not to be in the same country as George.  I made some quip about Ban Ki-Moon stalking me as he too was in London (considering I was heading for the UN this week I thought it relevant) but it went over his head and he was lost to his book, and I happily went back to mine (more Bonfiglioli).

The weather was pretty good on landing.  Which was a surprise because my original flight was cancelled because of poor conditions in JFK.  Well.  It was a lie wasn’t it?  I KNOW it was cancelled because they didn’t sell enough tickets.  I was told this truth many times (and rather emphatically) by my fellow travellers.   I adore old aged Americans, especially New Yorkers.  I cannot for one moment imagine my grandmothers generation wearing baseball hats and jeans and big white trainers (sorry, sneakers).   The all have such loud opinions – I want to seat them on park benches in Central Park and give them brown paper shopping bags (perhaps some could be jogging in flannel jogging suits, towel around neck).  I actually forgot how much New York looks like (or IS) a movie set.  It’s not just the steaming manholes, the fire escapes, the fire hydrants (fire theme emerging here) – it is the very people themselves.  No matter what origin there is a sense of being a New Yorker – which is strong like glue and chipper and friendly and proud.  Whether they are driving taxis, working in delis, swanking along 5th Avenue with dogs in their handbags, they all belong here.  And I can be marvellously British here (which I felt less able to in Bonn for some reason).  I like it.  At least for a couple of days.