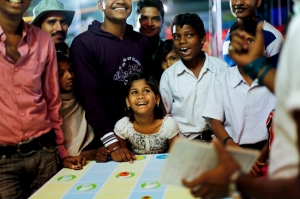 An unlikely carnival travelled over one thousand miles across India last month. The party included children’s games and workshops, cricket, Bollywood and …poo.

The carnival, known in India as a “yatra”, has been organised by Quicksand, an Indian development company and WASH United, an organisation where sports stars stand united with school children, top political decision makers and ordinary people from around the world to fight for universal access to safe drinking water, sanitation and hygiene.

India leads the world in child mortality from diarrhea.  Two of the main causes of this are poor hand-washing hygiene and open defecation. Every day enough Indians poo on railway tracks, roadside ditches and other open spaces in and around their communities to create a pile of excrement that would fill a cricket stadium to the roof.

With an aim of making toilets sexy, cool and desirable the travelling carnival has  reached over 80,000 people across India.  The messages are simple ones that will save lives – hand-washing at proper times throughout the day, using a toilet, and menstrual hygiene management. However the means are unique – a brightly coloured touring fair involving Bollywood-style performances, cricket-based games and stars from both.  Participants playing one of the 20 fairground games on offer, “Poo in the Loo” are asked to shoot a poo football into toilet-shaped holes. “Poo Carrom” is based on a popular Indian game where the striker hits germs off hands. Workshops include a well received and much needed menstrual hygiene management workshop and a competition for schools making “tippy tap” hand washing stations – one of 72 training sessions held at schools.

The carnival has the support of Bollywood Superstar Vidya Balan who also appears in television advertisements throughout the event. As a result, the Yatra is set to break the embarrassed silence in India over the economic, political, social and environmental issues related to sanitation and menstruation. Already over 300 news articles have been written about the travelling party – the majority of them in Indian newspapers.

The £1.3million project was funded by a range of private sector entities such as The Bill & Melinda Gates Foundation. Other funders include The Swiss Agency for Development and Cooperation, Gesellschaft für Internationale Zusammenarbeit and Arghyam. However, the yatra also has the support of Jairam Ramesh, the Indian Minister for Sanitation and Rural Development, who is promoting the use of a government sponsored programme that encourages Indians to build toilets and waste management systems in their homes for record low prices.

As the travelling carnival reaches the end of its thousand-mile journey, WASH are adamant that they will do it all over again:  “Nothing like this has been done before. We are the first yatra (or travelling carnival) like this, and we are hoping to replicate this model in other parts of the world starting in early 2013,” Says WASH Communications Manager Sabrina Aggarwal.

Some of the games http://www.nirmalbharatyatra.org/yatra-elements