On Saturday a group wearing pointed capirotes (hoods with eye holes) marched around the small Spanish town of San Pedro del Pinatar. Drums thumped, police blocked roads, and a small crowd gathered. This procession has taken place every day during my first (Holy) week here. Yesterday was Easter Sunday and the parade had grown twenty fold at least, as had the onlookers. Drummers were joined by a brass section and toddlers in white tunics and adolescents wearing mirrored sunglasses tossed cheap sweets at scrabbling, laughing children. Black-laced ladies paced morosely behind and a statue of Jesus rose again and again on the shoulders of cassock-wearing locals.

The procession circled the centre of town, passing bars and shops, banks and offices. Ad hoc food stalls were set up and many of those witnessing the spectacle were tourists, a handful of Brits among them. Having recently moved to the town to see whether a life can be made here, I wasn’t sure quite how I fitted in. My camera annoyingly ran out of batteries at the crucial moment of Jesus passing, so I reverted to quick-sketching what was around me. Pressing myself against a wall in the cool of the shade, I self-consciously scribbled away – the procession thankfully moved at a snails-pace and stopped frequently. But pencil couldn’t capture the gold-braid, the ruby red cloaks, the whiteness of the St Peter’s church against the blueness of the skies. Eventually I closed my notepad and just observed, as did many of the townsfolk – emerging from their homes, arms folded in quiet stillness. 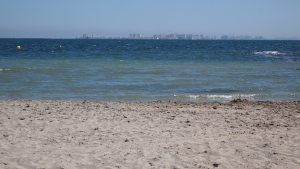 Although quite famous, the Easter parade had a gentle modesty that impressed me. It is the same modesty that led me to choose San Pedro del Pinatar as a place to live. The architecture doesn’t shout at you – there are no bold or flamboyant statements to be found and the clean(ish) streets are lined with simple palm and pine trees (as the name suggests). Perhaps the town’s ease with itself is down to the natural landscape surrounding it: There are breathtaking views across a colossal sparkling salt-water lagoon that take in a hulking mountain range alongside the equally hulking man-made high-rises on the spit of La Manga. The local waters are also home to flocks of pink flamingos, yachts and kite surfers. With sun, sea and landscape presented in such an extra-ordinary way – it is no wonder the charm of the people and the town of San Pedro appears so effortless.

In a Spain that we are told is struggling with unemployment levels and economic pressures, there feels like a subtle resilience at play in this small town. The are some boarded up shops and evidence of building projects started but not finished – but the town seems to shrug it off and get on with life. Whatever hardships there may be, the San Pedro del Pinatarians are hiding it well – and with good spirit – in just a week we have met friendly neighbours and exchanged holas with everyone who passes.

The surprisingly unpretentious yet glorious Easter parade is no signal that the town is not modern. Wifi zones are popping up everywhere, not unattractive graffiti art covers walls and the town has a state-of-the-art skate park. I look forward to reflecting on this place more with my art and writing in the weeks and months to come and ultimately inviting friends to be inspired by this place too.