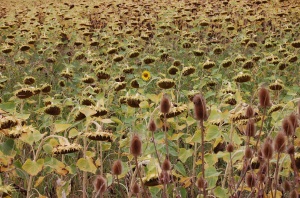 I promised to write again. (I am feeling that I need offer readers some genuine nomadic truths as this blog now has over 10,000 hits – a weird feeling).  But I am happy to report (not least to my doctor) that I have removed myself from net and screen for nearly a whole week (just the occasional peak).  In the main I could be found laid out next to a private pool surrounded by sunflowers, basking in the heat of the South of France.  I may have risen from the poolside to take in a tour of the local vineyard (delicious sweet white wine) or to venture briefly into the humourously name local French town of Condom for supplies, but in general I have been unwinding under the gaze of the sun and not even thinking about writing about it (well nearly not).

But, as hinted at in my previous post – on the way down to our southern retreat,  we stopped at Oradour Sur Glane. You perhaps think it a little unfair that I would drag five children to a site of a massacre during what was meant to be two weeks fun in the sun.  However – every one of the kids was enthusiastic about the visit – for different reasons.

For those of you who don’t know Oradour or the story:  on 10 June 1944  Oradour-sur-Glane in the Haute-Vienne Department of France was attacked by soldiers of the Der Führer Regiment of the 2nd Waffen-SS Panzer Division Das Reich. On that day they killed a total of 642 men, women and children without giving any reasons for their actions and to this day there is no universally accepted explanation for the massacre (although some say it was in retribution for the success of a single resistance fighter whose family hailed from the region).  People were burned alive in their homes, and women and children rounded up, locked in the village church, which was then set alight.

The village remains exactly as it was – in remembrance of those that lost their lives.

Each of us had a different response walking around.  The teenage girls amongst us felt almost disappointed that the charred husk of a village didn’t evoke more adolescent emotion.  Their lack of tears bothered them and they picked away at each story contained in each home – looking at the twisted metal of children’s beds, of rusty bicycles, dead cars and the patterned remains of fire-places searching for sadness.  My littlest boy, aged eight, seemed to find it most poignant, and studied every detail of the place.  Already a keen historian he was also fascinated by the evidence of how people lived in the “olden-days” (which extends to my own childhood in his mind!).

My own feelings were of anger.  Not that this atrocity had occurred, but that in modern-day times such crimes continued.  That villages of civilians are being burned.  The women and children are massacred.  So vital that this memorial remains and hats off to the French for such an appropriate and dignified site – but how much has the human species learned from it?  Iraq.  Afghanistan.  Somalia.  Rwanda.  Sri Lanka.  I could go on and on.  All places that have seen similar cruel death and torture since 1944.  Oradour just baffled me.  An incomprehension that humans can be so vile to one another.

My other half although moved by the story which he knew well, was surprised at how unmoved he was by the place itself.  He felt that so much time had passed it had been sanitized – and in true moving-on fashion my 11 year old commented that he thought it would make an excellent paint-ball site (but was otherwise hot and bored and wanted to leave).  The teenage girls were shocked – but I felt strangely heartened that he was so lucky that conflict was so foreign to him – the only association he could find in the place was in entertainment.  True conflict transformation from the mouth of a kid.

Despite my anger and bewilderment at Oradour, I remain a stubborn optimist.  I understand that for every bullet in this world there are as many if not more acts of kindness that cannot be measured.  One of the plaques at Oradour cheered me most – it read “from here 6 men escaped”.  Even in a field of dead sunflowers….if you look very carefully you will find a bloom. 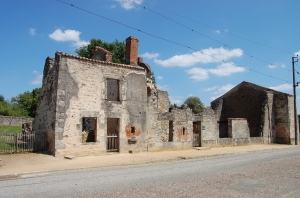 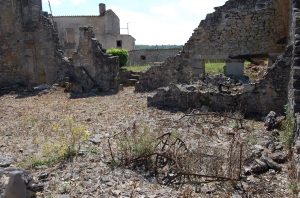